Blog, Do it Yourself Vocal Booth

Challenge of recording voice over or music at home is getting acoustics right.
Not everyone can afford to get acoustically treated rooms and well tuned studios.
Lots of effort goes into creating amazing and unique recording spaces to achieve good sound with what’s available.

It is not like this combination sounds shi…oddy, but the involuntary sound effects may eventually mix up
in your recording. Well, when Nature calls, cover your microphones!

Building a PVC vocal Booth frame for audio recording out of PVC pipes is probably the cheapest way to create
your own Home recording studio apart from building a pillow fort in a toilet.

PVC frames for vocal booths can range from very simple and straightforward cubes (cuboids actually),
with four vertical poles and 3-way connectors in each corner, or just couple of flat frames tied up
together to form a corner, so it can stand on its own, to more complicated interconnected maze or pipes and
connectors to ensure that the frame is not going to fall apart under the weight of the absorption material that
will go on top of it.   Whatever the shape of the PVC frame, the idea is to provide a structural support for
sound absorption materials, such as acoustic foam or sound blankets (or moving pads in cheaper versions),
and create an isolated acoustically treated space for audio recording.
We also added some designs into the mix with our video : How to build PVC vocal booth frame Cheap .

So what are the main features of the PVC vocal booth frames and what are the advantages of different designs?

Once the PVC vocal booth is constructed, people usually stick it in a corner of the room. 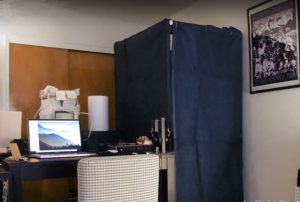 Which is not a good idea. This, again, goes to the difference of using soft sound transparent with sound absorbing walls, versus hard rigid, sound reflective walls in booth construction. Putting the PVC Vocal Booth flush in a corner looks neat and saves space, but it will not perform well acoustically. What happens, when you put the booth flush with a solid, sound reflective wall, the sound goes out of the booth and gets reflected right back in. Leaving some space between a reflective wall and the PVC vocal booth sound absorption panels,  will improve the acoustic performance of the booth considerably.

A lot has been written about the importance of the shape of an audio recording studio or a vocal booth and how it affects the acoustics inside the room. Parallel walls are bad, non-parallel walls are good. Diffusers and bass traps. Sound reflections, flutter echo, reverberation, standing waves, modes and nodes and so on.
All that is true for a solid wall booth construction with hard reflective walls. But it is not relevant for a booth with soft non-reflective, sound absorbing walls. Non-reflective walls do not create standing waves, modes or nodes. The sound goes out through the covering, partially loses its energy on the way out, reaches outside reflective walls of the recording studio or room in a house, bounces back and then gets absorbed on the way back. So different shapes have no real effect on PVC vocal booth acoustics from this point of view.
On the other hand different booth shapes create different size space and may need different microphone position. If the booth is too small, it will be difficult to work inside and the microphone may be placed too close to the sound absorbing material. This will cause more high frequency absorption at the microphone.
Rectangular shape is common because rectangular booth configuration feels more natural and have more room for setting up recording equipment. The connectors are easily available and much cheaper than the adjustable connectors. It is also more stable and has more useful internal space.

What is the best shape for a PVC vocal booth?

If the shape of PVC vocal booth with non-reflective, sound absorbing walls does not affect the internal acoustics that much, what shape the vocal booth should you make?  Consider how much usable space you need inside the booth, cost and availability of supplies and efficiency of the wall coverage. The rectangular shape would be the least expensive,  most practical and most effective.

Indeed, why if reflections are not an issue, would anyone want to have any other shape than rectangular? For example, why would you need a Triangular PVC vocal Booth frame ?
Well, in theory, to build a triangular booth one needs fewer parts, so it might be lighter to carry. Triangular frame uses only 6 corner connectors instead of 8, needed  for rectangular frame, and only 3 vertical poles instead of 4 for rectangular frame.
But in practice, the adjustable corners cost about 10 times as much as regular 3-way PVC connectors, so the final frame ends up to be more pricey. Also the triangle shape has the least effective perimeter to area ratio of all shapes. Meaning that triangular vocal booth would require more blankets to cover the same amount of internal usable space.   Stability of the triangular frame is also not as good as that of the rectangular frame.

It is natural to think that the triangular vocal booth can be placed in the corner of a room, so it does not take up much space. It is true, but 90 degrees corner of the room is the worst place for a vocal booth. This is where those standing waves gets trapped in. If you put the triangle booth in the corner, it will become a bass trap!.The triangular shape of the frame has its acoustic challenges too. Placing the microphone too close into the corner of the booth and too tight to the sound absorption material, may cause severe high frequency depletion.
On the other hand for the actor it gets a little tight because the walls are closing in towards the mic, so gesticulation becomes awkward. Of course the size of the triangle can be increased, but then whats the point of having the deep point?
Trapezoid shape alleviates all those issues and still allows to have the booth in the corner, yet far enough to avoid standing waves.

The ease of assembly easily lends the PVC vocal booths as a good candidate for mobile vocal booths that can be assembled and disassembled many times. And as such to be used as a portable vocal booth solution in the field.
It certainly looks that way. But in reality it may not be so simple. If you do not glue the PVC frame it tends to be wobbly and falls apart. To have it stay together without the glue you would have to push it in really hard. And if you do so, it will become very difficult to pull the piles and connectors apart.
So the catch 22 is if you do not want the frame to fall apart, then you need to insert the poles in connectors really tight, but if you insert them really tight you will not be able to pull it apart!In theory, of course, one can use a rope or a bungee cord to keep the frames together. A tight custom made roof cover will help to keep the frame together, so it actually can be used as a portable frame.
So for creative minds there is always a solution to dissolve unsolved issues.