‘’Producer’s Choice Sound Blankets are so worth it. They are a Godsend.’’ 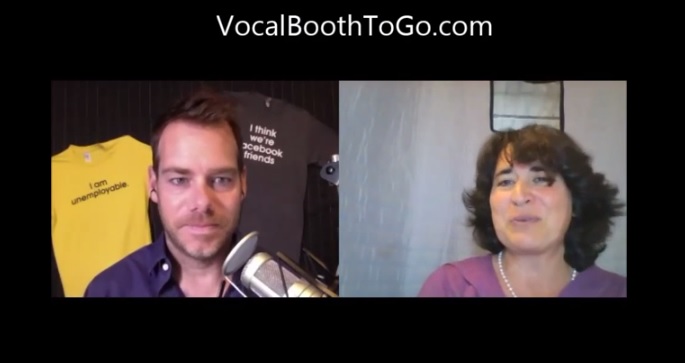 This comes from award winning podcaster Michael O’Neal during a video interview with VocalBoothToGo.com. Michael is the founder and host of a nominated 2O13 Stitcher Award Best New Show, The Solopreneur Hour – Job Security for the Unemployable.  Aside from podcasting, he also is a professional drummer. The challenge of having multiple roles created a need for a professional studio space to record his podcast show but also soundproof enough so he could utilize it as a Producer’s Choice acoustic blankets – and not get into noise disturbance trouble.

‘’The houses in my neighborhood are in close quarters, about 100 years old and the rooms couldn’t be less sealed,’’ Michael told VocalBoothToGo.com.‘’ I used Gobos in the corners and behind my drum set but they really didn’t do much at all.’’

Worried mostly that his drumming would cause issues with his neighbors, Michael was on a mission to stop the drum sound from escaping his studio and also create an acoustically treated area to record his podcast. He turned to VocalBoothToGo.com for advice.

In creating his space, Michael hung two layers of Producer’s Choice Sound Blankets around the room and also covered the windows with additional layers of acoustic blankets. This allowed him to create a completely dead sounding recording studio and soundproof his drum room at the same time.

‘’The first time I walked in my studio with the sound blankets up and then shut the door, my ears popped,’’ Wow! It’s like being in an airplane – the SPL (sound pressure level) is so low,’’ Michael shared. ‘’I have a pretty nice set up, and I can record pretty well down. I can’t endorse them enough, especially if you are a podcaster or vocal person.’’