Do it Yourself Vocal Booth, Success Stories, Uncategorized

Background:
For the past two years, I’ve have been taking voice over acting classes, and attending workshops to develop my skills as a voice over actor. Coaches, Agents, and Directors emphasize that first and foremost, one must become a good actor! But in addition to becoming a good actor, you also need to be able to create studio quality recordings. As much of the work is now being done in home studios, it’s extremely important to have an acoustically treated space in which to record. 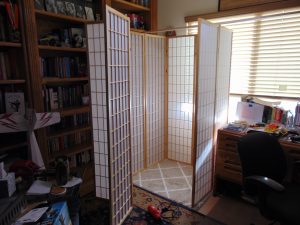 My first acoustic treatments:
In the first iteration of my home studio, I just set my mic on a desk stand in my home office with predictably terrible results. The noise floor in my office muddied my recordings. I then added a home grown reflection filter behind my mic, which I covered in Auralex foam . This was an improvement, but there was still too much noise in my recordings. I eventually learned through that the sound coming from in front of my cardioid mic, rather than from behind, has the most impact. I also needed to do more about the reflected sound waves bouncing around my office.

Building an affordable (effective) sound booth:
As I’m in the early stages of building a voice over career, I needed an affordable solution that wouldn’t break the bank. My solution was to build a fully enclosed sound booth in my office. I found some very affordable Japanese tri-fold Japanese panels at a local Japanese grocery story for under $50 each. I determined that 3 tri-fold panes would create enough space to set up my mic and a conductors stand for scripts. Of all the acoustic treatments I reviewed online, the Producer’s Choice sound blankets seemed to offer the optimal solution for an affordable acoustic treatment. For greater savings, I purchased a set of 6 black-white 80×80 sound blankets with grommets to drape on the inside and outside of the screens. I added hinges to join the 3 screens together, leaving one unconnected opening to serve as the door. I then placed 3/4 inch foam pipe insulation over the top edges of the screens to create a cushioned, rounded surface, and used Velcro straps to connect the inside and outside blankets which rested on top of the insulation. The weight of the blankets added to the stability of the screens, but I also 3 wood cross members for additional stability. One of the cross members helped frame the door opening. In total, I used 4 blankets for the inside and outside walls, and one blanket to cover the top of the booth.

In order that the panel serving as the door swings freely. I inserted a wooden shim under the screens frames on either side of the door, which lifts the panels about a 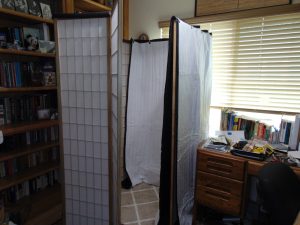 1/4 inch. This allows the door to swing freely. I trimmed off the excess wood from the shims, so they’re scarcely noticeable. I added handles inside and out on the screen that serves as the door, plus a small hook and eye to the inside of the door, so it can be latched closed when inside the booth. This seals the booth fully from outside sound.

Final touches:
For ventilation, I purchased the quiet ventilation fan with muffler along with the sound blankets. The fan lays on the floor outside the booth on a rug, and I attached flexible plastic tubing used for gutters to duct the airflow up the backside of the booth. I made a 90 degree bend at the end of the tubing and inserted it into the booth under the sound blanket covering the top. 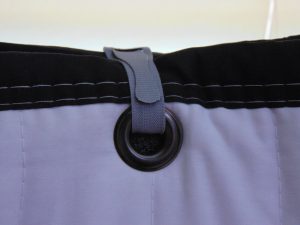 For light, I have an LED fixture that clips to the top of the conductors stand. I hung an over-the-door plastic clip on the wall, where I hang my headset when not in use.

Results!
My first recordings after building this acoustically treated space are far superior. I can hear and visibly seen the difference in the audio floor wave forms – they’re really clean! As I continue to work on gaining proficiency as a voice actor, the quality of my recordings will not be an impediment to creating professional, quality work.

I’m grateful to have discovered this affordable sound treatment solution! 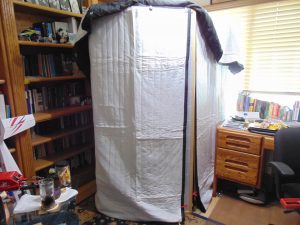